1,200 young people participate in the Unity Without Violence day

Students from 25 schools in Montreal participated in the 10th edition of the Day Without Violence at the Claude Robillard Center on June 12th.

For the occasion, 39 diversified workshops, many of them presented by the SPVM, were available to young participants. The event gave way to lunch and a major entertainment show. Students also had the chance to see and hear Mayor Valérie Plante and SPVM Director Martin Prud'homme at the event. Info-Crime Montreal has been the main partner of the USV program since the first day of its launch in 2008. According to the CEO of ICM, Jean Touchette, this is one of the largest prevention programs presented by the SPVM and ICM is very pleased to have invested nearly $ 300,000 since its creation. According to Manon Vouligny of the SPVM, the Unit Without Violence program is a great success thanks to the collaboration of schools and has so far reached more than 15,000 young people.

About the USV program

The Unit Without Violence program: express yourself! is aimed mainly at young people in the third cycle of primary school. Each student in participating schools receives a jersey that he or she wears one day a week throughout the year. This garment is the tool on which is registered, in the form of a contract, the student's commitment to not tolerate or use violence. Each contract is personalized because the student determines the phenomenon of violence he/she intends to fight. Each participant also receives a mouse pad that helps them on a daily basis to remember their commitment to non-violence.

Members of non-violent units are non-violence ambassadors in their school, who commit to meeting other students to talk to them about the program. They give award tickets to students demonstrating peaceful behavior. On each ticket is indicated the name of the person who had the good behavior, a summary of the action taken and the name of the member of the Nonviolent Unit who issued it. All students who have received a reward ticket are identified in each class each week. At the end of the month, a nonviolent Unity Award is randomly drawn among all the students who received award tickets, and another among the ambassadors who highlighted good behavior. 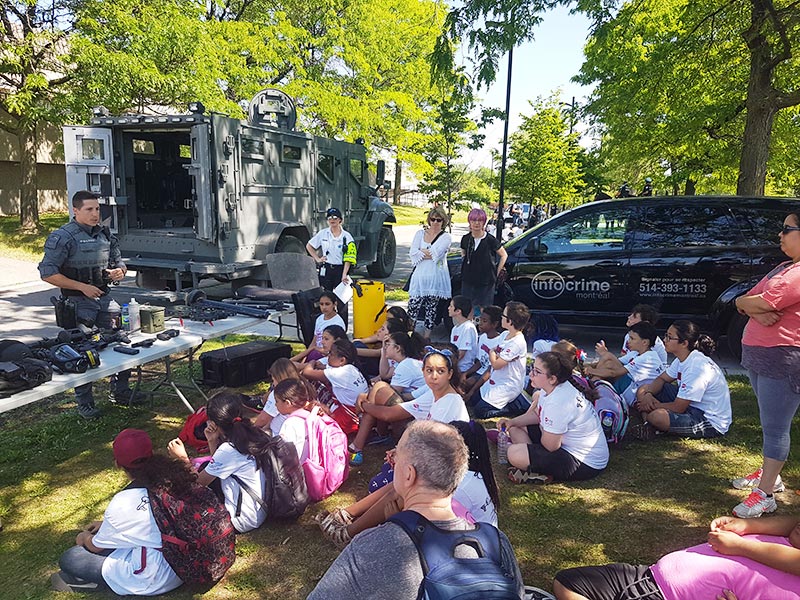 1,200 young people participated in the USV day held at the Claude-Robillard Center on June 13th. 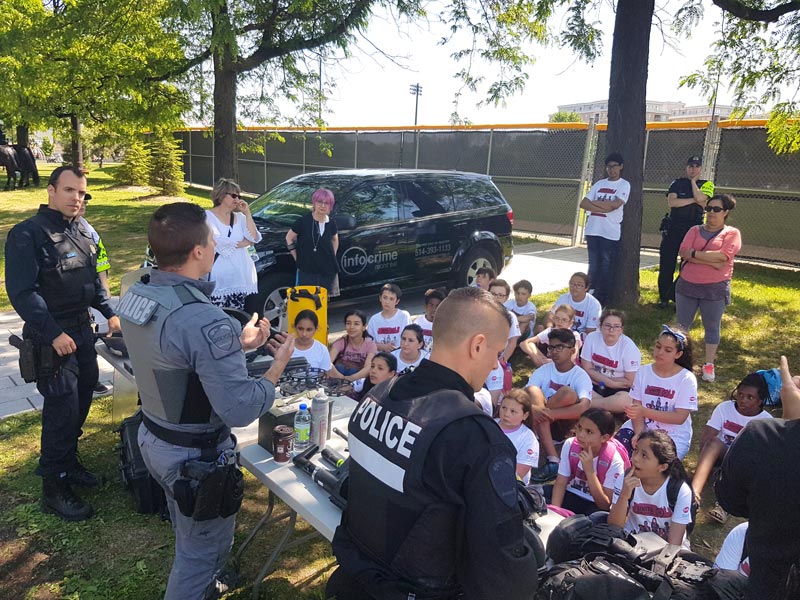 During the day, 39 workshops were available to young participants, many of whom were offered by the SPVM. 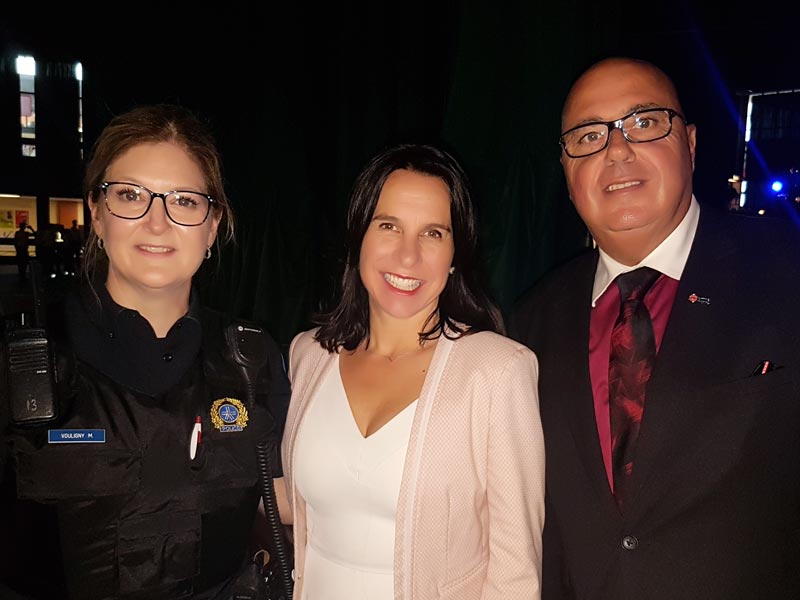 Mayor Valérie Plante delivered a message of congratulatory support to the 1,200 young people present. In the photo, Ms. Plante is surrounded by the head of the Unity without violence program, Manon Vouligny of the SPVM and the CEO of Info-Crime Montreal, Jean Touchette. 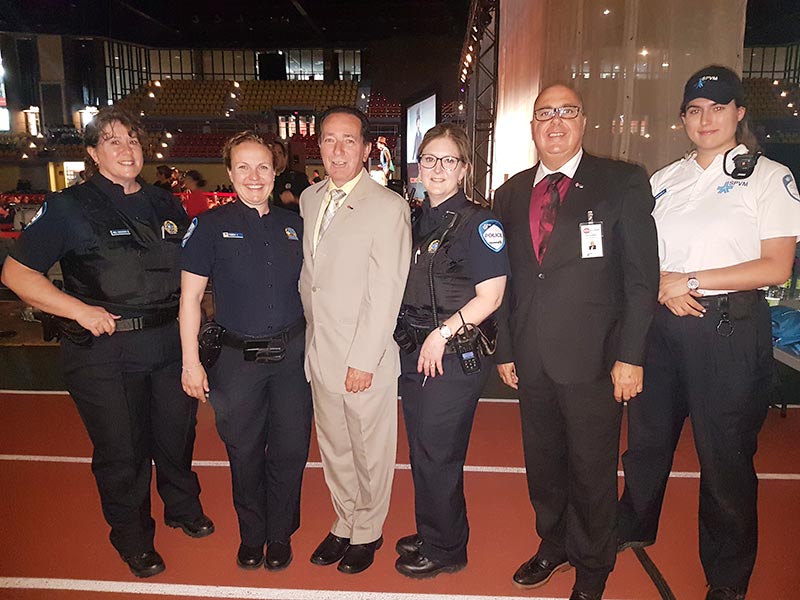 The success of an event of this magnitude is based on extensive teamwork. We see in the photo some members of the organizing committee and leaders of ICM. From left to right, SPVM agents Danielle Abel-Normandin, Émilie Toubeix, Aldo Arcaro, vice-president of ICM, agent Manon Vouligny, head of the USV program, ICM's CEO, Jean Touchette, and a young member of the SPVM Cadets. 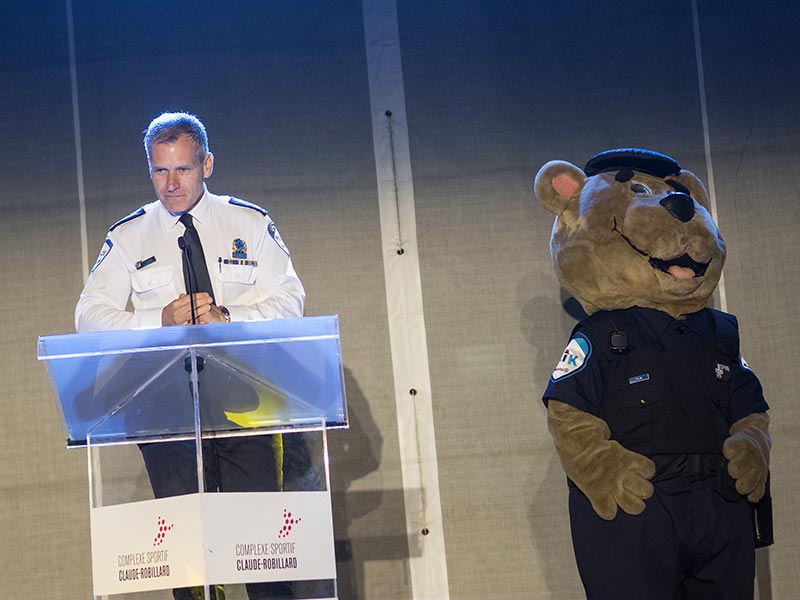 The director of the SPVM, Martin Prud'homme in front of the 1,200 young people present for the 10th anniversary of the Unity without Violence Day. Mr. Prud'homme took the opportunity to congratulate the students, teachers, parents and police officers who make the program a great success.