William Bumbray, the man who marked the history of Info-Crime Montreal, played a major role in the event.

The 30th anniversary banquet drew a record crowd of more than 365 attendees to the event which took place on October 26 last in Le Riviera banquet hall in the eastern part of the Island. The popular event was under the honorary chairmanship of William Bumbray and there never was such a large crowd in the history of the organization, who came together for the cause, according to Samir Hasbani, past President of ICM between 2000 and 2003. 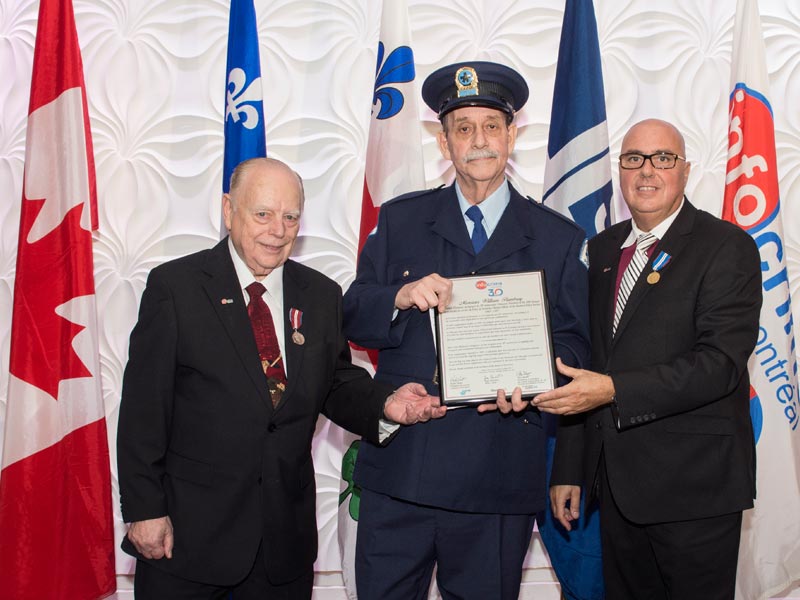 In the photo, at centre, William Bumbray, Honorary President of the 30th anniversary banquet is surrounded, on the left, by the founder and first President, Alex Harper, and on his right, the current President-General Manager, Jean Touchette.

During the colourful evening, animated by Joe Cacchione and under the musical direction of Lynn Harper, the founder of ICM and chairman of the organizing committee, Alex Harper, presented for the occasion 30 honorary souvenir plaques to people who have contributed to Info-Crime Montreal in the past and today.

The evening featured some moving moments, including an homage to the current chairman of the board, André Drolet, who received a standing ovation from those present. In addition homages were extended to the honorary chairman of the event, the legendary William Bumbray who also received a big surprise, announced by Senator Jean-Guy Dagenais, to the effect that he will receive, on November 29 next in Ottawa, the medal struck to for the 150th anniversary of Canada.

Info-Crime Montreal is a call for self-respect, help us to continue our mission by distributing the message, by calling 514-393-1133 or by visiting our Web site : www.infoCrimeMontreal.ca