William Bumbray will be the Honorary President on the occasion of the banquet to celebrate the 30th anniversary of ICM on October 26 next. Retired member of the Montreal Police Service, Mr. Bumbray was a definite ambassador over the years following the launching of the program. It will be recalled that at that time there were re-enactments of crimes which were telecast on TQS and CFCF television, which turned this police officer from the West Island into a celebrity, despite himself. 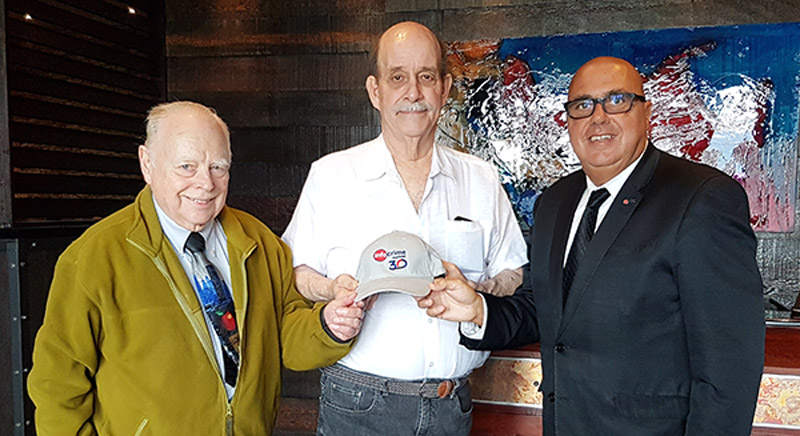 In the photo, at centre, William Bumbray, Honorary President of the 30th anniversary banquet is surrounded, on the left, by the founder and first President, Alex Harper, and on his right, the current President-General Manager, Jean Touchette. The upcoming celebrations hold much promise.

The banquet will officially highlight this historic moment at Le Riviera reception hall, located at 7600 Henri-Bourassa East, in the Anjou Borough. The évent will bring together people who believe in the mission of ICM as well as several other intervenants, including the Director of the City of Montreal Police (SPVM), Mr. Philippe Pichet.

During the evening, testimonials will be conveyed to several people who played a major role in the development of the organization since its founding thirty years ago by Alex Harper and the late Roland Bourget. It is possible to purchase tickets to attend the banquet by contacting the administration by telephone at 514-827-6133. The cost is $125 each. A receipt for $50 will be issued for income tax purposes.

Info-Crime Montreal is a partnership with the City of Montreal, involving the participation of the general public, the media and the police. Since its creation, the charitable organization has encouraged citizens to fight against crime by communicating, in an anonymous manner, information respecting criminal activities. In addition, financing is provided to several projects involved in preventing violence among young people and senior citizens.